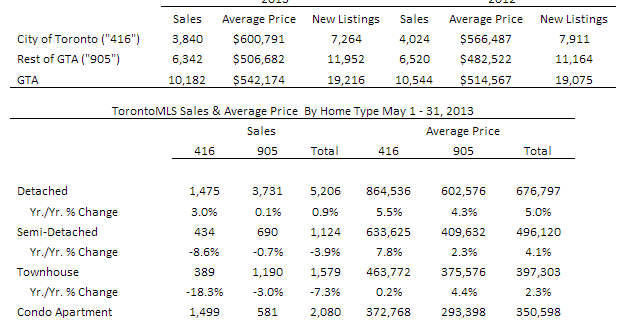 TORONTO, June 5, 2013 — Greater Toronto Area (GTA) REALTORS® reported 10,182 sales through the TorontoMLS system in May 2013, representing a dip of 3.4 per cent compared to May 2012. Sales of single-detached homes in the GTA were up by almost one per cent compared to the same period last year, including a three per cent year-over-year increase in the City of Toronto.

“The sales picture in the GTA has improved markedly over the past two months. While the number of transactions in April and May remained below last year’s levels, the rate of decline has been much smaller. A growing number of households who put their decision to purchase on hold as a result of stricter lending guidelines are starting to become active again in the ownership market,” said Toronto Real Estate Board President Ann Hannah.

The average selling price for May 2013 sales was $542,174 – up by 5.4 per cent in comparison to $514,567 in May 2012. The annual rate of price growth was driven by the tight low-rise segment of the market and particularly by single-detached and semi-detached home transactions in the City of Toronto. Average condominium apartment prices were also up slightly in comparison to last year.

The MLS® Home Price Index (HPI) Composite Benchmark was up by 2.8 per cent year-over-year.

“The annual rate of price growth in May was not surprising given the competition that still exists between buyers, particularly for low-rise home types such as single-detached and semi-detached houses. We remain on track for a three-and-a-half per cent increase in the average selling price for 2013 as a whole,” said Jason Mercer, TREB’s Senior Manager of Market Analysis.