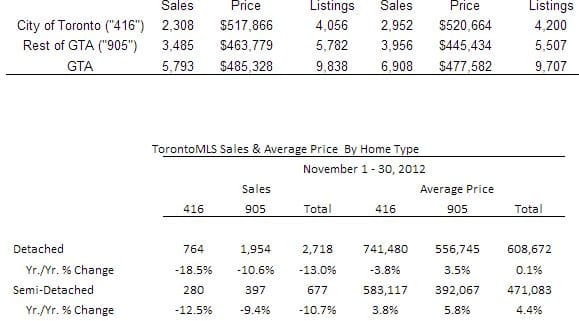 “Transactions have been down on a year-over-year basis since June, after being up substantially in the last half of 2011 and the first half of 2012.  Some buyers pulled forward their decision to purchase, which has impacted sales levels in the second half of 2012,” said Toronto Real Estate Board (TREB) President Ann Hannah.

“Stricter mortgage lending guidelines, including a reduced maximum amortization period and a purchase price ceiling of one-million dollars for government insured mortgages, have prompted some buyers to move to the sidelines.  This situation has been exacerbated in the City of Toronto because the additional upfront Land Transfer Tax takes money away from buyers that otherwise could be used for a larger down payment,” continued Ms. Hannah.

The average selling price was up by 1.6 per cent annually to $485,328.  The MLS® Home Price Index (MLS® HPI) Composite Benchmark was up by 4.6 per cent compared to last year.

“The moderate annual rate of price growth compared to previous months was largely due to a different mix in detached home sales this year compared to last, particularly in the City of Toronto.  The share of detached homes that sold for over one-million dollars was down substantially, which influenced the overall average price,” said Jason Mercer, TREB’s Senior Manager of Market Analysis.

“The MLS® HPI detached benchmark price, which tracks the price for a home with the same attributes over time, was up by almost six per cent in Toronto, suggesting that market conditions for low-rise homes remain quite tight despite a changing mix of sales,” added Mercer.